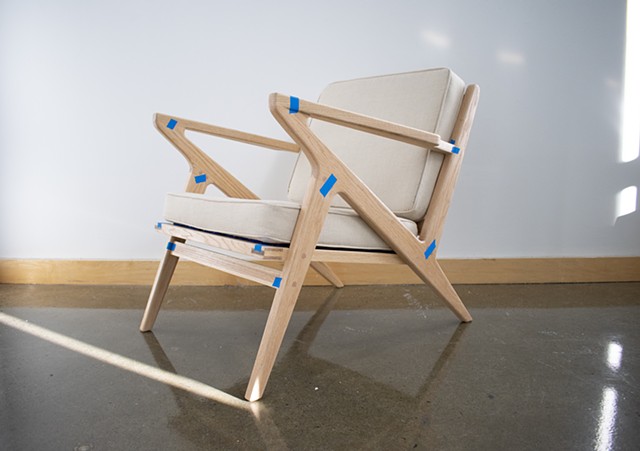 Seat for Paulo is a design exercise in sensorial and ideological hybridity that examines dominate narratives around philosophies, psychologies, and pedagogies. Seat for Paulo operates in a heterochronical fashion, visually pitting modernist and postmodernist ideals against one another and effectively, I would argue, generates a third. This third ideal transcends and includes both ideological narratives by way of perennialist embrace in that it honors not just one particular or universal, but rather the idea that particulars and universals are codependent in regards to meaning making. This codependence is found in the relationship between democratic institutions and their necessary antagonisms. Democracy depends on the steady friction of dissent to maintain an ever arising pursuit of social equanimity. In broader terms: disorder affords order or death implies life. Seat for Paulo is therefore a design attempt to engender these terms of being with a functional object both sensorily and ideologically. Inspired by and a homage to Paulo Freire, Seat for Paulo is my visual expression of gratitude for Freire’s work as a visionary theorist of social, psychological, and spiritual liberation. It is also simply an object for appreciating the manifold nature of human beings perceptual abilities via the mashup of historical epochs. In his 1970 text Pedagogy of the Oppressed, writer and theorist Paulo Freire advocates for what he calls a “problem-posing education” which is in direct contrast to traditional methods of rote pedagogical approaches. Unlike the systematic and methodological rote processes, “Problem-posing education affirms men and women as beings in the process of becoming—as unfinished, uncompleted beings in and with a likewise reality”. Freire goes on to say:

The unfinished character of human beings and the transformational character of reality necessitate that education be an ongoing activity…Education is thus remade in the praxis. In order to be, it must become. Its “duration” is found in the interplay off the opposites permanence and change.

Considering the timeless beauty of Poul Jensen’s Selig Z Chair as a symbol of permanence (modernity’s embrace of absolutes) and the painted blue painters tape as representing an aesthetic of change/impermanence (postmodernity’s rebuke of absolutes), I aim to capture Freire’s sentiments of being. As an object for sitting in contemplation Seat for Paulo will hopefully instigate first a visceral and sensorial inquiry of literal security versus precariousness (will this chair support me?), and secondly, a reflection on how these emotions are transposed to larger sociopolitical inquiries via design (can design engender critical discourse while simultaneously satisfying a basic need?)